This is the first morning we three watched the sunrise on the deck. The air is rich with the babble of songbirds, once a monotone of chickadees but now a full symphony to spring.
I had intended to photograph the Arnold Arboretum this morning. Last night's visions of bare branches rising ghostly from the spring fog gave way to visions of sugarplums during a night with many wakings. So when Maya the cat marched around on my pillow at 5:00, I barely stopped snoring long enough to tell her, "More night-night".
By 6:00, it was too late for ghostly fog, so we (I) brought two heated kitty beds outside with my coffee and enjoyed the music. The sun rose orange in a peach-and-aqua sky.
It's such a luxury just watching the dawn without shooting it. Almost immediately, someone turned off the symphony. Sun's up. Time to get to work.
But first, here's a photo from yesterday's sunrise rainbow. A breathtaking sight that had me running for a good position. Enjoy! 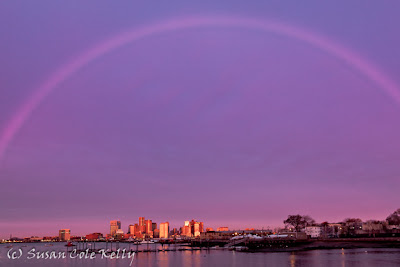