Just a quick update... My farm has been found! It's the Robinson Farm, in Woodstock.
Thanks so much to Judy Lombardi, sleuth extraordinaire! And to Google Street View so I could see what she was showing me.
Posted by Unknown at 5:06 PM 1 comment:

The last foliage in Vermont

I went to Hartland Lake near Woodstock, VT, this morning, hoping for a little fog on the water, and maybe some red light at sunrise, and maybe a few pink clouds from the approaching storm. It looked good on the map. The lake stretches from west to east, surrounded by hills, and I hoped the warm sunlight would rake the trees.
I guess they only grant one wish at a time, and mine was for fog. I never saw the lake. After trudging out to the dam and back, I shot some pine trees, some milkweed, and a misty  marsh. 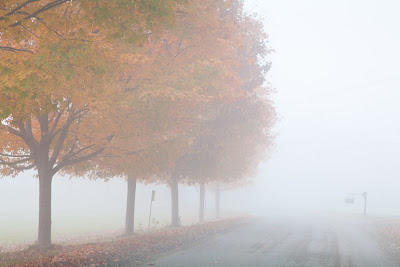 Then I drove up Clay Hill Road toward Woodstock and found this row of maple saplings. They made a surreal sight, fading into nothing. I included the road and a mailbox to give them some context.

In Woodstock I realized that, while the lake was fogged in, the rest of the world was sunny. The village looked great, and I headed up to Cloudland Road to catch the last foliage shots on the farms there. For a while I played leapfrog with three other photographers. It's Thursday, and I could hear the line from Butch Cassidy and the Sundance Kid: "Who ARE these guys?"  And why don't they have day jobs? Yesterday someone told me that there were 40 photographers at the Jenne Farm last Sunday, so I was ok with only three.
There's a storm coming in tonight, a whopper. The Weather Channel says it will bring down all the foliage. The Vermont weatherguy said the same thing. Whoosh, most of New England will be bare. So these may be the last images I'll shoot in Vermont or New Hampshire.  There's still hope for Massachusetts.
______________________________________________________

I have a problem. There's a barn, it's a beauty. My caption says it's in Pomfret, VT but I can't find it. I think I've eliminated about half the roads in Pomfret. But I haven't eliminated the possibility that the barn is in Barnard or Sharon or Timbuktu. Please let me know if you see it anywhere. 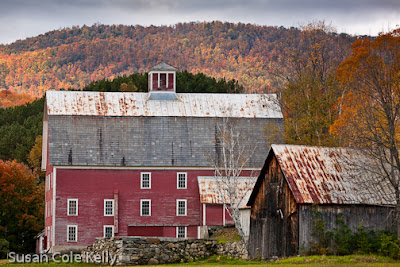 The red barn above is next to this big white house. If I remember right, the barn is recessed down the driveway when you're driving in one direction, but really stands out (like the picture) in the other direction.

Jackman and Route 201 in Maine 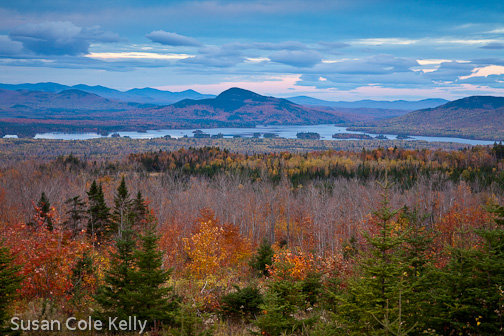 One of these days, I'll be in this spot near Jackman, Maine, at sunrise and the mountain will be radiating red alpenglow and the lakes will be reflecting it, and the foliage will be peak and the sky will be neon and.... Well, I was there, but the sun didn't show up even though the weatherman assured me it would. He tricked me into getting up at 3:30 and driving 75 minutes to get my fantasy image, and all I got was this!!! I'll work on it some more. But it will never match that imaginary sunrise! Maybe I'll get it next year.

In my travels, I did see a few critters, including this rest-area fox who wanted to share my hard-boiled egg. Most of the wildlife was actually wild, but this guy seemed pretty comfortable begging for food - I wonder if he'll be able to survive the winter?
I also saw 6 moose between Baxter State Park and Jackman, plus several loons, two eagles, and a ruffed grouse. The wildlife is really out! Of course, it WAS the wilderness. Route 201 is the Old Canada Highway, running from Jackman south to Skowhegan, Maine. Much of it follows the Kennebec River and all of it is scenic. Just don't expect too many strip malls. The area is full of sporting camps, fishing cabins, and Maine Guide services. I try to visit at least once a year.
The day was cloudy, with wind and heavy rain predicted for afternoon. Home was calling. As I traveled south by the Kennebec River, I stopped to photograph river scenes, but the white sky reflected in the water and made everything drab. I composed this shot to eliminate the sky. Notice how bright the color is, even though much of the peak foliage blew away in the last storm. There are still green leaves here, and they will develop color as the season progresses. 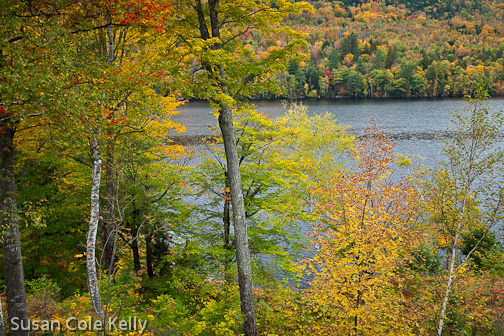