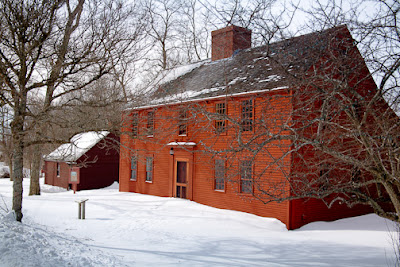 Have you opened the December issue of Down East, the Magazine of Maine yet? I've got a double-page picture on pages 6-7. It's the old tavern in... whoops, I almost told the secret! It's this month's "Where in Maine", and you're supposed to guess where it is. Looks great, eh?
Posted by Unknown at 1:08 PM No comments:

Autumn in the rear view mirror

Just finished editing my autumn work. It's 8:30 at night, there's Christmas music on TV, and I'm still in my jammies. But the big edit is done. Here are my favorites. Enjoy! 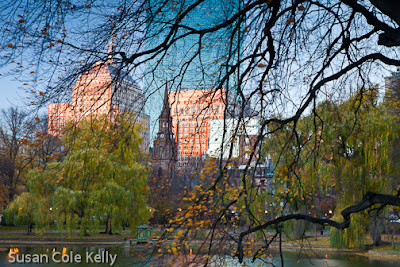 I love living in Boston. It's odd, because I'm not very social, don't hang around the theater or ballet, don't even go out to eat much. But I still love Boston. Visually, it's just wonderful to be able to wander around the parks - Boston Common, the Public Garden, the Charles River Esplanade to name a few. From cherry blossoms in April to late foliage in November, there's always color. Follow the history on the Freedom Trail. Admire beautiful architecture from Trinity Church in Copley Square to the new Institute of Contemporary Art on the waterfront. Try Quincy Market for people-watching.   Or stroll by Back Bay brownstones and shi-shi shops on Newbury Street. Eat Italian in the North End or Asian in Chinatown or Yankee at Durgin Park. Watch the harbor traffic along the waterfront.
You get it. It's the sheer diversity of the place that I love. There's always something interesting to shoot. And, while I love nature photography, I really love living in the middle of all this diversity and being able to access so much of New England's natural beauty so easily. I dream of living on a marsh somewhere, but one of the criteria would be easy access to Boston, so why move? 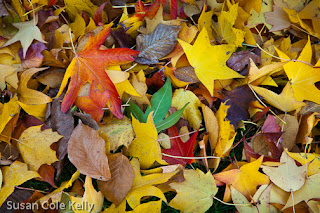 This morning I arrived at the Public Garden before sunrise. True, the sun doesn't break the horizon until 6:30,  but it's still satisfying to be up early. The park in front of my house is getting bare, so I wanted to check on the Garden. There, the many types of trees bloom and fall at different times, so I was sure there would still be color. Yes! European Beech holds on to its leaves late, as do Norway Maple, American Sweetgum, and the oaks. Even the Dawn Redwoods were golden. Plenty of color, even in this tough year. 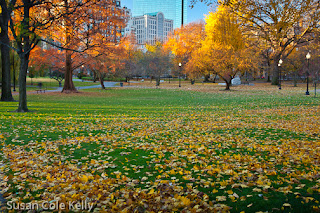 I shot for a while and left before I had to feed a parking meter, although I think I could have wandered around for another hour or so. A quick stop at one of my favorite grocery stores and I was home in time for breakfast. So far, a good day.
Posted by Unknown at 4:14 PM No comments: 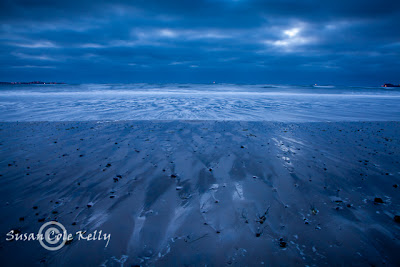 It hits me suddenly. I'm scurrying around, trying to get pictures of the last golden leaves before they all fall and the world is bare. Suddenly, it hits me: the world IS bare, autumn IS over, and I'm spinning my wheels. I look at the last few days of pictures and realize that it's time to stop shooting foliage, because the foliage is gone.
I find myself catapulted through the five stages of grief. Denial is long past, I've been shooting brown grass for weeks. Anger has come and gone, usually directed at myself for not producing the same fabulous images I did in October. And I have bargained - If I just drive a little further, maybe It will last longer. Depression? Ah yes, that's usually the point when I wake up and notice that all is not well. I sleep through the alarm, close the blinds, and take two naps a day. I spend my time looking at all the pictures that aren't processed yet and mourning autumn's passing. The TV runs constantly, I eat carbs, I sit all day. So pathetic.
Now that I know where I am, there's only one way to go - acceptance!  Well, I'm having a problem with that one. I'll be happy when it snows, looking forward to picturing Christmas decorations and winter scenes. But November itself is just too cruel. Stick season. Gray and brown and dead. Time to hibernate.
Or maybe not. There are always seascapes.  And sunsets. And if, one of these frosty mornings, I happen to find ice on a pond or frost on a branch,  I will have to take a picture or ten.

Wednesday, with a storm offshore, the coastal waters were all churning with waves. I went to Scituate Light, on Boston's South Shore.  Couldn't find a vantage point to get the really big waves with the lighthouse, but there was a sliver of clearing in the western sky, so I stayed until dark. Beautiful sunset over the harbor. Beautiful light on the whitecaps. I could get used to this. And the really good news is that I don't need to get up at 3:30 or work until 9:00 to get sunrise and sunset shots!

Thursday morning I was up before dawn, aiming for a beach sunrise. Looked good from my balcony. By the time I got to the beach, clouds were piled up in the east.  I took a few pre-dawn photos and decided to take a walk. The sun never did break through the clouds but way up above, there was some good color. I had my 24-105mm lens with me, not wide enough to catch the sky plus the beach. But the clouds were bright enough to reflect in the water, and I loved the way it looked. So I shot some images, hand-held. Nice. I can accept this. 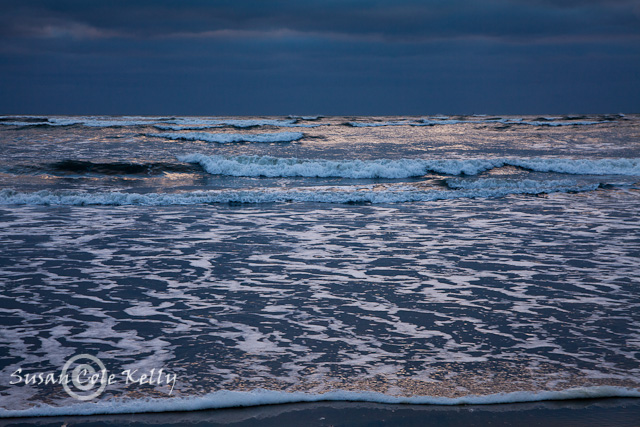 A sliver of light and a nice guy 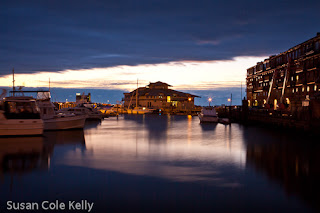 When I woke up this morning, there was a huge cloud over my house but a big clear space in the East. Now, I know that weather usually moves from West to East, but I ignored this knowledge as the weatherman was saying something about clearing. So I made breakfast, got ready, and arrived on the waterfront of Boston before sunrise.

A glance at the sky told me I'd need to wait a while, because a stripe of cloud was clinging to the horizon. So I shot a few harbor scenes and then settled down in a spot with a view of the Custom House tower and some brightly-colored black locust trees. Every few minutes I peered over to see what was happening in the sky. The clouds were closing in on the bright strip. If the sun did come up over the cloud bank, it would shine for only a few moments.

Seven o'clock. Seven-ten. Seven-fifteen. The city was coming to life around me. Dogs and their walkers passed, traffic picked up on the nearby street, and I waited. The rim of the clouds was glowing. Any minute. And then, two pickup trucks drove into the park. One passed. One parked right in front of me. I made a gesture, but not the one you might be thinking of. The two-hands-halfway-up, hey-whaddaya-doin-guy gesture. The driver made a funny face and drove ahead,  just as the alpenglow painted the side of the tower.
For three minutes I shot. Bracketing, using three different filters, trying to take a still picture as the wind made the branches sway. The light was gorgeous. It was one of those scenes that has you breathing heavy. Then, as fast as it had started, the sun disappeared behind the top cloud, and my sliver of light - and time - was gone. I looked around for the driver who had moved for me.  Couldn't see him. Maybe he had gone for coffee, or to check out his work site. It would have been nice to thank him. 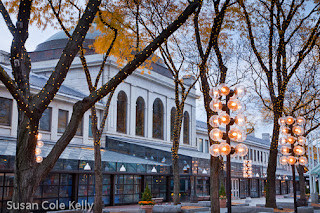 The park is only a block from Quincy Market, so I walked over to see if there was any foliage. Yes! More black locusts, and the bee lights were on, too. It looked a bit like Christmas in October. So I took a few shots there.

It was 7:40, only twenty minutes until the parking meters start. It's really great being able to park free to shoot mornings in Boston, but the 8:00 deadline makes me feel like Cinderella rushing to her pumpkin-coach.
As I neared my car, I saw the guy. I showed him on the back of my camera, the picture he enabled me to get. Thank you, driver-guy, it's a really beautiful shot. Thank you! 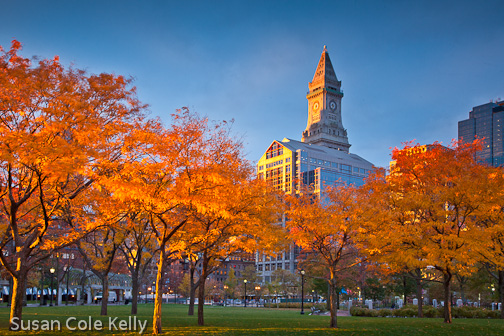