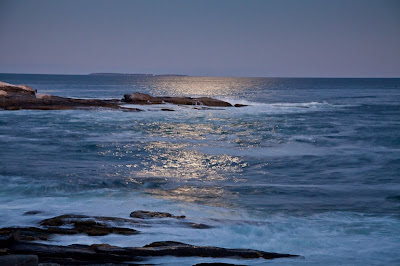 I've been chasing storm waves from hurricane Igor for four days. Friday was too early, but on Monday the surf warnings were up along the Maine coast. I had already hit Schoodic Point and gotten wave pictures, but I really wanted something special. So I decided to drive three hours down to Bristol to get storm waves with Pemaquid Point Light. 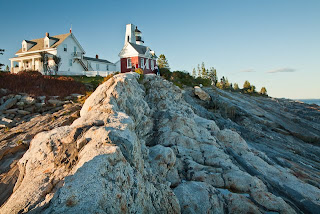 You've seen the lighthouse a zillion times. The rocks surrounding it are legendary, with striations forming leading lines right up to the tower. I've shot it a zillion times. White tower, red outbuildings, gray striped rocks, blue sky. I have it at sunset and sunrise (morning is better). Trouble is, everyone else has it too.

I had previsualized Pemaquid in sunset light, with monster tsunami waves overtopping the rocks and sparkling in the alpenglow. What an imagination! Trouble is, to get the waves with the lighthouse, you have to be down in the rocks, a very dangerous place. If I were young and agile, I'd be there. but I've experienced rogue waves which come out of nowhere and crash 100 feet further upshore than any previous wave. Luckily, I just got soaked. But a woman had been swept out to sea that morning, so I wasn't going down there.

I asked the ranger if there were other vantage points which gave a good view of the surf, and she directed me to the loop road. The road overlooks a small cove topped by the light station. So I wandered around the tower shooting the standard views for a while, then headed down to the loop road just before sunset.
The view was uninspiring, and I almost returned to the park. But something told me that this place might be different later.
I stayed on the loop road, had a snack, called home, and watched the sun sink below the horizon of neighborhood homes and backyard trees. The whole coast was washed with waves turning gold in the late light. Neighbors walked down to the rocks with wine and cheese. NPR was playing Led Zeppelin clips and the waves were crashing and life was feeling very good.

The lighthouse looks so much better from the rocks, but this quickly became more about the light and the water than the lighthouse itself. And the emotional experience, which was topping the photographic experience so far.

The sky turned pink, and the waves reflected the color. My exposures were getting pretty slow. I alternated between shallow depth-of-field and high ISO to get fast exposures, and large depth-of-field with low ISO to get slow exposures and misty looking waves. There was no wind, no traffic, just me and the cove.

Then the magic happened. I zoomed out and realized that there was more to this scene than the mid-range composition I had been focusing on. On the right, the full moon was up and glistening on the water. On the horizon was Monhegan Island, with another lighthouse. I wish you could see this blown up really large. But it's not bad here. A lighthouse, and moonlight, and waves. Worth the three-hour drive home. I feel serene just looking at it now. 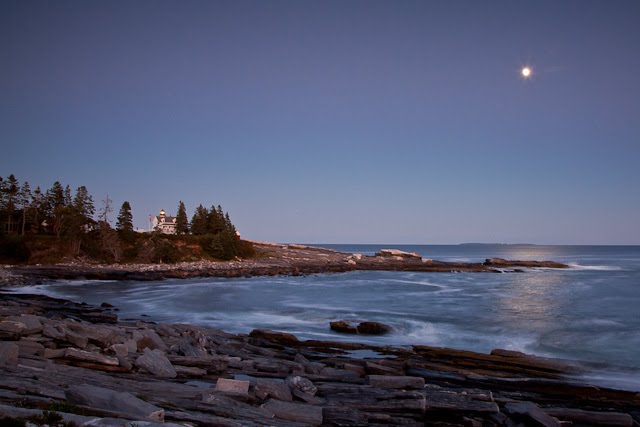 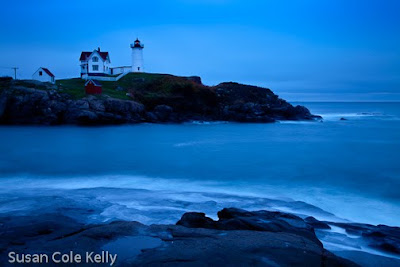 Last Friday, I had plans to do Nubble Light at sunrise with storm waves from hurricane Igor. But I didn't get up at 3:00, so by the time I got to the lighthouse the sun had risen behind a thick cover of clouds.  It was gray, really gray. Not only that, but the storm waves hadn't shown up yet. Yuk!

So I added a 1.8 neutral density filter to my lens. This made everything dark, so my exposures would be slow. I also set my aperture at f22 and my ISO at 100. The goal was to make a very slow exposure, so the waves that did exist would have that silky, dreamy look. I set the exposure value (EV) to -1.0 to make it look like night. The shutter speed was now 15 seconds - long enough for silky water and then some.

When I loaded the images onto the computer, I was still disappointed with them. Slow shutter, yes, but it would have been so much better if I had shot it before sunrise on this cloudy day.  Why? Because pre-sunrise light is a very beautiful saphire blue. After dawn, the color was simply drab.

The fix was an old trick from film days.  Mismatched white balance! Years ago, we would use tungsten-balanced film (for regular interior lights) and underexposure to give a nighttime appearance to daytime pictures. It doesn't work on everything, but on this picture, already a slow exposure, it might be just fine. So I set the white balance in Adobe Lightroom to Tungsten, fine-tuned the colors, and came up with the first image on this page.

Of course, I didn't need Lightroom to change the white balance. I could have used the camera to shoot it with a tungsten or fluorescent setting. But it's warm and dry here, and I can play at my leisure. I've tried this image in Black & White, Sepia, Cyanotype, and other effects in Lightroom.  There are lots of ways to make it look better. 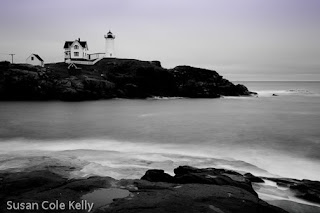 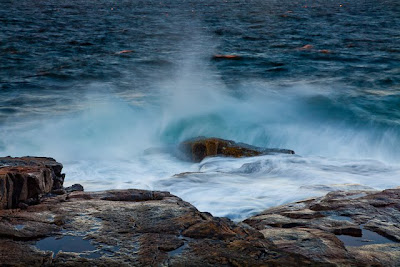 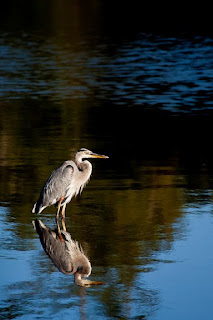 I've been playing with waves all weekend. Hurricane Earl came and went, and Saturday the waves were high. There's no place better than Acadia for surf, and I do have some pictures of waves breaking 50 feet in the air with a crowd of onlookers. But this morning the ocean was back to normal, and we hit Schoodic Point again at sunrise. The images are in process, but I just had to stop for this pretty little thing. Nothing grand, nothing spectacular, just blue water with a bit of motion-blur and some sharp rocks. Such fun to play!
On the way out, we passed a small pond with three great blue herons. They were spread out so much that the pictures showing all three are not especially attractive. But individually, they made some lovely images. They weren't very worried about us, and after a few minutes of shooting from the car, I moved slowly across the road toward them. Breakfast was more interesting than two slow humans and they fished and posed for quite a while.
Posted by Unknown at 6:22 PM No comments: 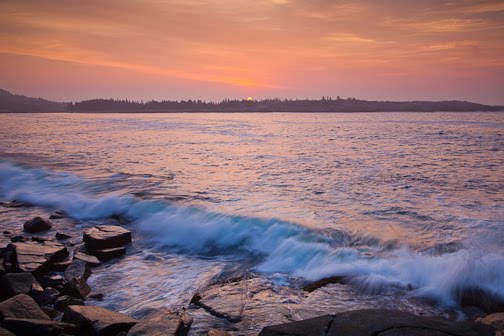 The sky has been red for three mornings, and now hurricane Earl is imminent. The storm seems to be fizzling out after all the hype on the weather channel, but we saw its impact this morning - on the sunrise. This is Schoodic Point in Acadia National Park, ME.
Posted by Unknown at 4:47 PM No comments: