The first Wildflower of Spring 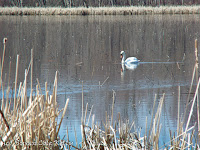 I had a tough weekend. Saturday, I went to Concord to shoot the re-enactment of the first battle of the revolutionary war at the Minuteman National Historical Park. I was there at 11:00, but no action. Then I checked my printout and found that it was scheduled for 1:00, not 11. So I went over to the Great Meadows National Wildlife Refuge. Pretty bleak. There was a nesting redwing and a swan cruising around, but most of the movement was human.
Back to the battle site, but still no action. A ranger said they had had to cancel the re-enactment because of the possible government shutdown. Humbug!  My next stop was the Belmont Audubon center, but again things were looking bleak. Only April 9, after all.
Next I went to Mount Auburn Cemetery in Cambridge. This sounds like a lot of jumping around, but it's all on the way home. The trees are still bare, and I didn't see one magnolia or forsythia in bloom.  But the early bulbs were out, so I played with Siberian skrill and Glory of the Snow - two blue beauties that have flowers less than an inch wide and stay low to the ground. I had bought a couple of extension tubes for doing macro photography with my regular lenses, and wanted to get to know them. So I crawled around for an hour and refreshed my macro skills.

Sunday, I drove up to Nottingham, NH to find Hepatica. Wow, am I rusty! I got to the park, found the trail, and started walking. Then I realized that I didn't have a trail map, didn't have a wildflower book, and didn't have a clue. I followed the trail across a brook and up a small hill, realizing that I had no idea how or where these things grew. As I left, I saw two SUVs with young guys who looked like they knew what they were doing. Except that one of the cars had two surfboards on it. At least my car wasn't in their way. This time, I drove straight home and shut the door behind me.
Monday morning it was rainy out, chilly and raw. I rode my bike, cleaned the house, and did some office work. The clouds started to clear and the air turned steamy. After Sunday's wildflower bust, I did some research and found a place closer to home that sounded promising - Middlesex Fells. The plan was to get a map, talk to a naturalist, and get oriented. Maybe a little conditioning walk.
The visitors center was wide open, but no one was there. Not looking good. I found a little map and headed toward the Virginia Woods parking lot. Passed it once, passed it twice, passed it a third time. (Note to self: Get a dementia test before you forget!) Finally,  I headed off on the trail, knowing that I still didn't know where I was going, but in a more exploratory mood.
Spring wildflowers bloom before the trees leaf out and block their light. That eliminated the hemlock forest, no light there. Down to the left were oaks and beeches, and not a leaf in sight. As I wandered down the hill, I found a brook with stone bridges and two waterfalls. Later, a small gorge. As the trail circled around a small hill, I saw a flash of white. I turned to look, but it was gone. I should have moved on, but something said to follow my instinct. A few short steps. And there, in the dry duff, there were dozens of little white flowers.

Bloodroot! Their leaves wrap around them like a little blanket. And they start popping out while they're still under the leaves on the forest floor. So delicate, so beautiful. 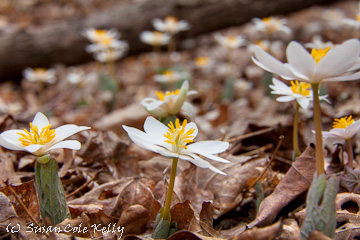 As the little plants come out, they put up leaves. It's like a teaser of what's coming.  I try to figure out what kind of leaves they are: Trout lilies. wild geraniums. wood violets. Spring is here, with lots more to come. Things are looking up!
Posted by Unknown at 12:23 PM