I've spent the afternoon playing with blue ice. Not the real stuff, way too cold, but a picture of frozen salt water in Downeast Maine.  I liked the patterns in the ice, and I liked the blueness in the photo I took, but wanted to see what else could be done with it.
I was thinking about the work of a facebook friend, Stoney Stone, while I shot the ice. "How would Stoney frame it?"  One of the great benefits of being part of a group of photographers is that you get to learn from everyone, experts and newbies too. The influence of other people challenges me, surprises me, and broadens my imagination.
Stoney messaged me with some advice, which gave me a starting point. So I'll show you the road he took me down, and you can decide if you like the results. To some, it will be like looking at all the "white" paint chips in the big hardware store. I thought it was interesting enough to share. 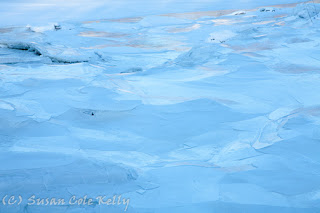 Here's the original picture in Adobe Lightroom, with my white balance set on Auto.  I really like the patches of color created by the light and shadow, and the warm reflections at the top where the ice was shiny. But it's too blue! 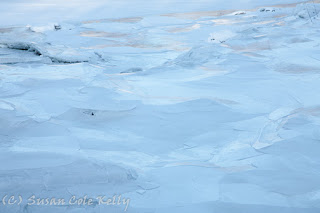 On Stoney's suggestion, I processed it in Photoshop :
Image -
Adjustments -
Hue/Saturation -

Decreased the Blue until it looked slightly blue but not neon. The ice has a much more delicate look. 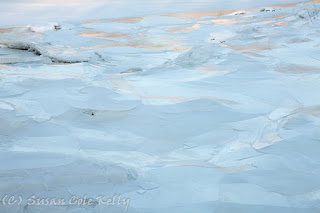 Then I tried playing with the original in Lightroom. Decreased the blue, increased the red and orange. Not bad. 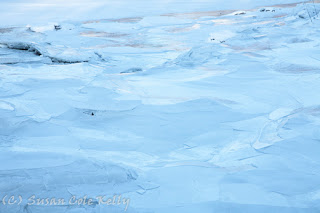 Next I took the original picture and changed the white balance to shade, which corrects for the blue hue. It looks more blue here than it does in Lightroom, but you can still see the difference.


Finally, I took the picture with the corrected white balance and processed it with Photomatix Pro, which is HDR software. I couldn't do real HDR processing because I hadn't shot bracketed photos. But part of the HDR processing is a thing called Tone Mapping which brings out the details in both shadows and highlights.  These colors are much closer to what I saw this morning, and that warm reflection really shows up. 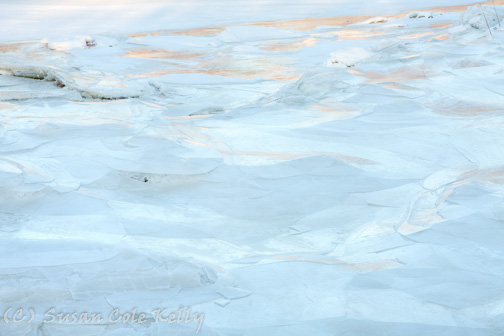 By the way, you can visit Stoney at 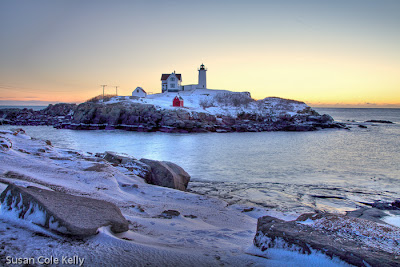 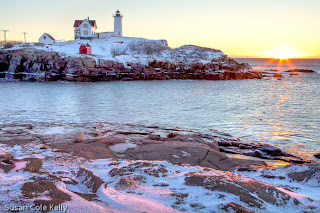 After last week's blizzard, I went to Maine to capture the Nubble. The prospect of getting beautiful snow pictures was really exciting - I love winter!  So I arrived before sunrise and shot the changing light. It was a totally cloudless day, not the best for photography, but I like the pictures I got. There was snow on the ground and the light was really clear.


Then I wandered up the coast a way, eventually making it to Kennebunk, and wandered back. It was a challenging day for photos. The clear, crisp air and full sun created very contrasty conditions. Since cameras can't capture both sunlit snow and deep shadow, I ended up post-processing most of my images in Adobe Lightroom to control the contrast. Most of the shots I kept were taken with the sun behind me - what photographers call "flat, frontal lighting".
Most photos look better when the sun is on the right or left of the subject. These angles create attractive shadows which show the shape of the subject and give a feeling of depth. I like shooting into the sun for special atmospheric effects like fog and God rays. And I love shooting in rain, snow, and even cloudy days. But direct sunshine? Not so much!
Despite the stark light, I did manage to get some calendar shots out of the trip.

I arrived back at Cape Neddick about 30 minutes before sunset and looked around for a variety of views. This is the lobster trap Christmas tree at Fox's Lobster. Yes, I did Photoshop out some phone wires here. 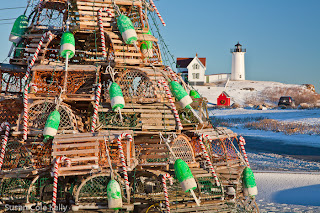 My goal for the day was to capture the Christmas decorations at Nubble Light. So I walked around the tiny park that overlooks it. There's not much chance of getting any really new views without a boat, but I did find a spot where the power lines didn't show, and a few variations with rocks in the foreground, and I managed to not fall into the ocean.
The sun was close to the horizon and the light was a warm peach tone as I waited for the Christmas lights to come on. 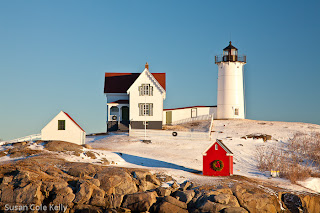 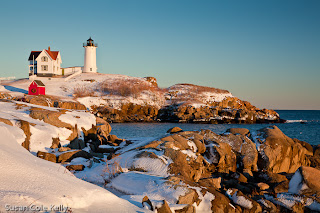 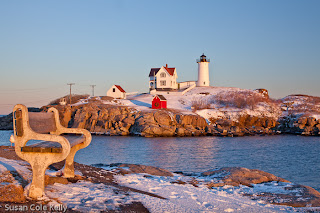 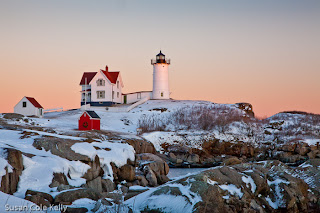 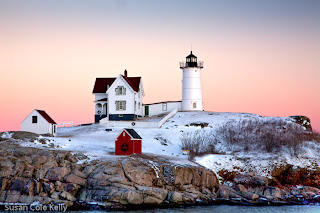 ... And finally realized that there would not be Christmas lights tonight, not even the lighthouse beacon. The blizzard had caused power outages on the coast, and I had found one.  No lights at all!
The day was not a complete loss. While I was waiting, I had taken some lovely images of the Nubble at dusk. And, after it got dark, another photographer introduced himself and we chatted for a while. Lighthouse images and a new friend - not a bad day! 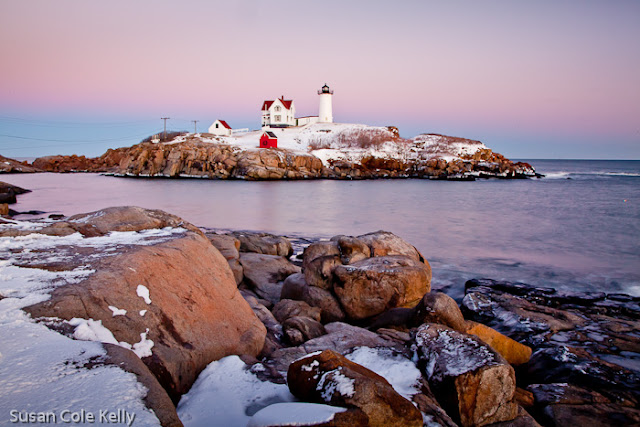 Don't feel too bad for me - here's last year's image!


See more of my new work in my gallery on Photoshelter. 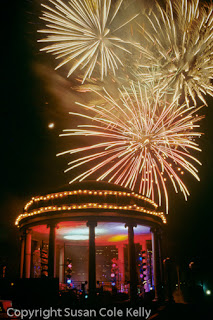 The holiday season is fast approaching its end, highlighted on New Years Eve by First Night Boston. I know there are other First Night celebrations, but this is mine and I love it. I used to work for First Night Boston, until I was replaced by a platoon of volunteers with digital cameras. Now that's progress!
Anyway, I brought out a couple of old pictures to share with you. Back in the day, I actually did do portraits and concerts and happy people celebrating. There are so many opportunities to try different things at a day-long event like this, it's really fun. First nights are alcohol-free, with family events during the day and cultural events at night.

Boston's New Years Eve celebration has two fireworks launches - one around 7:00 and the second at midnight. For early-birding party-poopers like me, that's terrific. The early "Family fireworks" happen at the Boston Common. You can shoot them with ice sculptures, outdoor entertainment, and the ice skating rink. It's an unusual opportunity to shoot fireworks with a foreground.  The midnight fireworks are launched from Boston Harbor, so you need to be in East Boston to get a good view of fireworks over the city skyline. 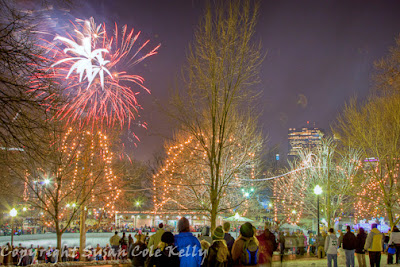 This picture shows last night's fireworks over the Frog Pond skating rink and some of the million spectators who cheered them on. 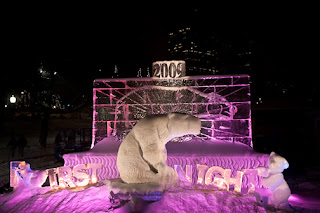 Of course, many New Years Eve events offer opportunities other than fireworks. Like ice sculptures. I am in awe of the artists who carve these short-lived creations.  To take a block of ice, carve it with chainsaws, blow-torches, ice picks, and whatever, and then simply let it melt away would drive me crazy. I would want more permanence. But the ice sculptors work their medium to its best advantage, and the finished product is lovely to photograph. My camera's automatic exposure works quite well on ice sculptures. The ice picks up the colors in the lights around it and shows the textures beautifully. The worst problem is getting close enough to the displays to photograph them!

A couple of years ago, there was snow in the air on New Years Eve. The snow picked up the light and made Boston Common look magical. The lights twinkled, the air was filled with gold, and the fireworks were almost anti-climactic. I don't like crowds, but I love First night. 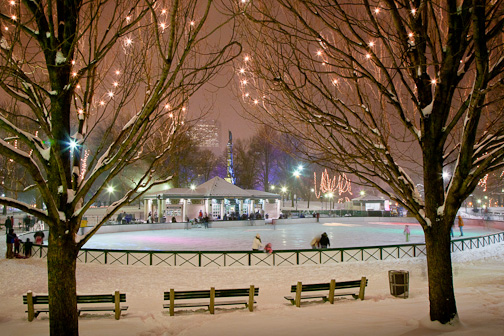